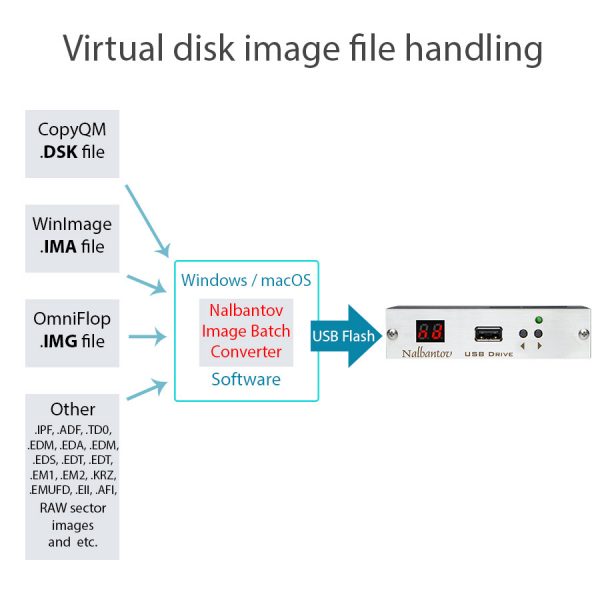 Using the included software, you can convert your existing image files to virtual disks that will be supported by the emulator. Image files are virtual floppy disks for your equipment. They are made from a standard floppy disk, using a third party software or they are downloaded from internet.

Transferring your floppy disks to the USB flash drive

If your floppy disks are MS-DOS compatible, you can easily copy them, by using an external or build in floppy drive installed on PC (Windows) or Apple (MAC OS).

If your floppy disks are not MS-DOS compatible (cannot be opened on a computer), these floppy disks are protected and RAW access is the only possible way to transfer them. MAC OS and/or external USB floppy drive cannot provide such access. It is possible only via Windows based desktop PC with build in floppy drive. This is a limitation of the hardware, not of our software. If you do not have PC with internal floppy drive, you can send us your floppy disks and we will download the files.

Why some floppies are difficult to be read or copy?

If we talk about games, in the ’80s game consoles like Atari and Amiga used floppy disks for their games. Floppies are copy protected.

Similarly, companies producing machines and industrial equipment, protect their software from copying. Or they use non-standard computers with their own software. For that reason, these floppy disks are difficult to clone or copy.

Meanwhile in Japan, having the PC developed by NEC – PC-9800 briefly called PC-98. They use special formats for their floppy disks with different rotation speeds. These computers are widely used in Japan in various fields – from gaming consoles, music synthesizers and industrial machines.

Some of these disks are impossible to be downloaded with ordinary computer and it requires a special hardware to be transferred to virtual disk images. For example, disks with different spinning speed, copy protected disks, 5.25 inch disks, or disks with specific formats.

Such disks may be decrypted and converted to virtual disks in our laboratory. You can send them to us and we will download the files.

Translate »
Cart
Your cart is currently empty.
We use cookies to ensure that we give you the best experience on our website. If you continue to use this site we will assume that you are happy with it.Got it!Read more